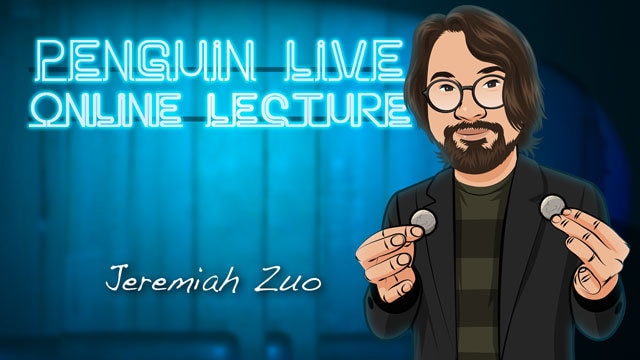 FINALLY! That is not just me shouting, it is the collective voices of magicians around the world who have witnessed Jeremiah’s coin magic. This is not hype or hyperbole, it is simply a fact. I have witnessed countless magicians, including some of the very best, flock to Jeremiah to learn the Drop after they have seen him perform… Jeremiah describes himself as a “magic fan.” I describe myself as a “Jeremiah fan.”– Tom Dobrowolski

[The Institutes] is the best collection of effective and intelligent coin magic you'll ever see from a guy who refuses to call himself a coin magician. Can’t believe Jeremiah is going to tip this stuff. I thought it was going to stay hidden away from the magic world forever! – Curtis Kam

Jeremiah is an incredible artist and thinker, and I think it’s absurd that he says he’s “not a coin guy.” His work on a move he calls “The Drop” is absolutely groundbreaking, and the good news is that I think I will be able to do it! This one move serves as the foundation for an incredible series of routines that will blow your mind. If you’re like me, and practicality, naturalness, and above all, good angles are paramount for you, you’re gonna love this stuff!… That 'No Touch Coins Coins Across' is absolute perfection. Jeremiah, you are a deliciously evil thinker. – Jack Carpenter

The coin magic is world-class. You've found/created a whole new way to do some fundamental sleights that's significantly better than the standard fare. I'm experiencing the same sense of joy and wonder that I got from the shuttle pass explanation in Coin Magic… Buy both [of Jeremiah's] books. Buy them now … “The Drop,” from his coin book will change your sad life, for the good. Both books are %$#@&* wonderful. Now leave me alone. I'm trying to work through Those are the Aces … – Kent F. Gunn

What will he teach?

Get ready for lots of clinking metal and lots of fun. Jeremiah is bringing an all coin lecture to town. But don't walk out the door because you don't have to have palms of steel to follow along! He will let you in on arguably his greatest secret. Lots of folks think Jeremiah is a coin guy. He is not, but he will teach you how he fools people into thinking otherwise and how you too can fool people into thinking you are a coin guy. By mastering one move and related applications you too will look like a coin master.

The Drop – A move that has become the foundation of Jeremiah's coin magic and the most popular thing that he does. The basic technique is natural, casual, versatile, and fooling. It serves as the father of a whole family of fooling techniques including shuttlepasses, changes, various click passes, and false counts.

A “Four” Coin Trick – Four coins vanish without any of the traditional hand-to-hand tranfers or even hand closing. Reproduce all four, produce six more, then vanish all ten! Jeremiah will share his basic three coin vanish sequence, and use it to demonstrate an important lesson on how you can change nothing but framing and presentation, and totally change one trick into completely different trick.

No Touch Coins Across – Three coins travel from one hand to the other … no recounting and the hands never come together!

One Touch Coins Across – For those who just can't stand to only send three coins across. A version of the previous routine with four coins.

Ted v. Morto – The weirdest hanging coins presentation you will probably ever hear.

That Trollish Chinese Escaping Coin – Despite some silver-armored guards, a solid bronze prison, and some silky restraints, you just cannot get a handle on this professional Chinese escaping coin. A three-phase Okito box trick with an interesting premise.

Wild Coin (Coins, Purse, No Glass) – Three silver dollars visually change places with three Chinese coins with no apparent fidgeting, finger movement, or any other opportunity for sneakiness. Jeremiah shares a technique that a number of others have discovered, but isn't as popular as it should be.

HeavenBound Spellbound – Produce three coins one at a time, all while they change back and forth between Silver Dollars and Chinese Coins

Follow the China Man – Taking advantage of some newly popular coin gaffs, you can do a magically packed and internally-consistent matrix: including multiple gathers and a stunning backfire, all without knuckle-busting moves.

A Trick With a Cow – Jeremiah will perform and discuss the various elements of his signature, sit-down, coin routine. Spellbound, transpositions, assemblies, it's got 'em all.

Jeremiah Zuo grew up in the Chicago Magic Scene, patiently waiting in the shadows of various Marlo students and heirs until the proper moment to strike. A regular at the famous Midwest Magic Shop, Jeremiah has received praise from some of the top names in magic and established himself as a reclusive local legend. If you ask him, he is not a magician. Jeremiah considers himself a fan of magic, and has all but completely avoided conventions and lectures, “Let the real magicians do that work.” For the last decade his occasional lecture notes were prized by magicians in Chicago, but mostly unavailable anywhere else. It has only been in the past couple of years that Jeremiah finally agreed to publish his magic for a larger audience in two popular books, Confessions of a Magic Fan, and The Institutes of a Magic Fan.

We are proud to offer international shipping services that currently operate in over 200 countries and islands world wide. Nothing means more to us than bringing our customers great value and service. We will continue to grow to meet the needs of all our customers, delivering a service beyond all expectation anywhere in the world.

How do you ship packages?

Packages from our warehouse in China will be shipped by ePacket or EMS depending on the weight and size of the product. Packages shipped from our US warehouse are shipped through USPS.

Do you ship worldwide?

Yes. We provide free shipping to over 200 countries around the world. However, there are some locations we are unable to ship to. If you happen to be located in one of those countries we will contact you.

We are not responsible for any custom fees once the items have shipped. By purchasing our products, you consent that one or more packages may be shipped to you and may get custom fees when they arrive to your country.

Do you provide tracking information?

Yes, you will receive an email once your order ships that contains your tracking information. If you haven’t received tracking info within 5 days, please contact us.

My tracking says “no information available at the moment”.

Will my items be sent in one package?

For logistical reasons, items in the same purchase will sometimes be sent in separate packages, even if you've specified combined shipping.

If you have any other questions, please contact us and we will do our best to help you out.

All orders can be cancelled until they are shipped. If your order has been paid and you need to make a change or cancel an order, you must contact us within 12 hours. Once the packaging and shipping process has started, it can no longer be cancelled.

Your satisfaction is our #1 priority. Therefore, if you’d like a refund you can request one no matter the reason.

*You can submit refund requests within 15 days after the guaranteed period for delivery (45 days) has expired. You can do it by sending a message on Contact Us page

If you are approved for a refund, then your refund will be processed, and a credit will automatically be applied to your credit card or original method of payment, within 14 days.

If for any reason you would like to exchange your product, perhaps for a different size in clothing. You must contact us first and we will guide you through the steps.

Please do not send your purchase back to us unless we authorise you to do so.

There are no reviews yet